Courtney Barrow
-Why Be a Woman?- 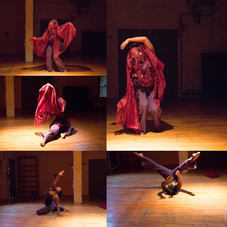 Courtney is a Brooklyn-born Afro-Caribbean artist, who uses her combined loves for dance, psychology and embodied anatomy and physiology to research and play through improvisational movement. She considers dance as a life practice and a form of celebration, grieving, processing, inquiry and healing. She describes dance as medicine for the mind, body and soul. With over 20 years of dance experience she now practices and teaches as a solo artist in Buffalo, New York, and has collaborated with the Aerial Verde performance company, Angela Lopez/ Collective Collective, Anne Burnidge Dance, Aurora Dance Project, Buffalo Aerial Dance, BCIJPG, Center Dance, Stanzi Vaubel​ and Torn Space Theater among others.

Arrow Fitzgibbons
-Why Be a Woman-

Nancy Hughes
-Why Be a Woman?-

photo: Jim Bush
-who grew up in Texas--lives in Buffalo, NY as a teacher, dance-maker and performer. Nancy’s dance work is often in collaboration with other artists, and has been seen at the Burchfield-Penney Art Center, Elmwood Festival of the Arts, and City of Night. She teaches improv and modern based dance classes and co-facilitates a regular contact improv jam in Buffalo. Nancy has taught and performed her work in such places as Portland Oregon, Colorado Springs and Paris, France. Companies for which she has performed include Suchu Dance, AlienNation, and Anne Burnidge Dance. Nancy is influenced by the work of Nancy Stark Smith and the Underscore, and she co-coordinates the annual Global Underscore. Her work has received grants from Northampton Arts Council, Mollye and Kelly Maxner, KeyBank, and NYSDanceForce. She holds a certification in Pilates from Motion Studies and a BA in dance from Texas Woman’s University.

Rachel Keane
-Why Be a Woman?-

(aka Henry James) has been practicing contact improv for over 7 years, primarily in Buffalo, NY. He has attended several Mission Improvable workshops, studying with international artists Yanna Papa (Greece) and Yeong Wen Lee (Singapore) as well as Boston-based artist Neige Christenson. Henry has been a member of BCIJPG-a local contact improv/dance/performance collective-since its inception, and has participated in nearly a dozen performances. He looks forward to practicing, teaching and learning CI for the rest of his days.

Sophia Roberts
-Why Be a Woman?- 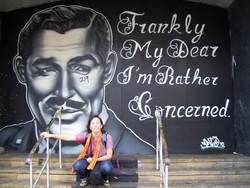 approaches dance as a revolutionary activity.  She loves dance for community building, for its ability to break down barriers between people, and to move energy.  A serious dancer as a child, as a teenager she quit dancing and got involved in activism and media production, A recovering Russian style ballerina, her focus in dance has been on play, improvisation, contact, community, and dance as a spiritual activity, She has been a regional coordinator for the Self Advocacy Association since 2002, supporting people with developmental disabilities to speak up for themselves, doing community education and systems advocacy.

photo: Jared Allison
is a long-time musician, and more recently a massage therapist and dancer; however, a large part of his interest in Contact-Improvisation comes from his study of the Christian tradition and, in particular, its relevance to the creative process.  Other interests similarly inspired are improvisational formats for story-telling, theater, and music, The majority of his experience with dance is in social forms- Waltz, Swing, and, most recently, Argentine Tango. 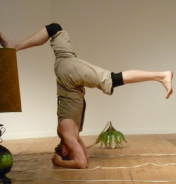 hails from the Windy City.  He studied dance and theatre at Illinois Wesleyan University, and also massage therapy from The Chicago School of Massage.  Phil has danced for fun and profit many years since, most prominently at Inaside Chicago Jazz Dance, and at LehrerDance here in Buffalo, where he tours the country teaching and performing Lehrer Dance technique.  His love of body mechanics leads him to throw himself at others and see what happens. Good thing that's the group he's in. 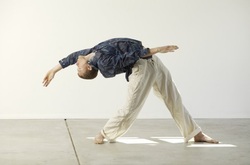